DIRECTIONS TO THE BOAT

Our daily Wreck Dives are ideal for more experienced divers, as we dive deeper wrecks and reefs in the early morning. Typically, we dive one deep shipwreck (maximum depth around 100 feet/30 meters) and then visit one of our beautiful coral reefs for our second dive (40-60 feet/12-18 meters). Depending on conditions and currents, as well as what your group wants to dive, sometimes we are able to do a double wreck dive. If the conditions are ideal, we can dive three different wrecks in one two-dive trip!

Wreck dives are not beginner dives. We ask divers joining us on wreck dives have at least an Advanced Adventurer certification (or equivalent), or a minimum of 25 dives.

If you do not have the appropriate dive experience, you can sign up for our Wreck Diving or Deep Diving specialty courses. We can also offer an Adventure Dive which would be part of your SSI Advanced Adventurer certification.

Please contact Hawaiian Diving Adventures to talk more about our incredible daily wreck dive options. You can use our online booking form to schedule your trip with the best dive charter in Honolulu. Read more below about the wrecks and artificial reefs that we visit on our wreck diving trips off the south shore of Oahu. 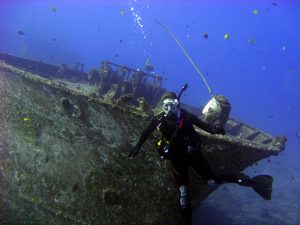 On February 17, 1992, authorities caught the Taiwanese commercial fishing vessel Yun Fong Seong #303 sneaking 93 illegal Chinese immigrants into Honolulu Harbor. The ship did not answer any of the harbormaster’s radio calls. Only three harbor police officers were on scene to stop the illegal immigrants. Each immigrant probably paid about $30,000 for the voyage. Every single one of them was deported. Paul Watson’s Sea Shepherd Conservation Society bought the boat at auction for the minimum bid of $40,000. The ship’s intended purpose was to prevent illegal drift netting off of Hawaiian shores. When these plans fell through, a Vietnamese fisherman bought the ship and renamed her the Sea Tiger.

The fishing vessel sold in 1994 to a man that had endless trouble and bad luck with the ship. It leaked oil and fuel into Honolulu Harbor, upsetting U.S. Coast Guard and environmental inspectors. It then lay abandoned at the pier. Voyager Submarines bought the Sea Tiger for $1 and spent $250,000 preparing her as an artificial reef for their underwater tours. The following year, Voyager Submarines went out of business, and left the wreck for scuba divers. 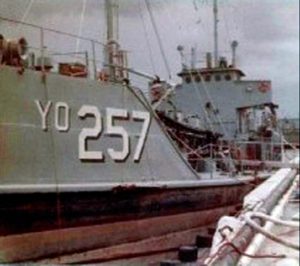 This U.S. Navy ship first started as the Yard Oiler Gasoline YOG–72, a self-propelled gasoline barge. She was built in 1943-1944 at the Navy Yard in Puget Sound, Washington. Her job was to fuel the Pacific Fleet, with a fuel cap of 6,570 barrels. It is not known if the ship was active before the end of World War II. In the 1950s, the YO stationed at Port Apra, Guam. Sometime later, she was re-designated Yard Oiler YO-257 and mothballed. In 1963, the YO was loaned to the U.S. Coast Guard to carry asphalt for a runway and establish a LORAN-C Station on Yap.

The YO is a yard ship, meaning it usually operates just in the harbor. The Coast Guard had to modify the ship for the 500-mile open-ocean voyage. There was only enough water on the ship for drinking. The crew had to use seawater for cleaning and bathing. They even transformed the rear gun mount into a shower!

As part of their submarine tour, Atlantis Submarine bought and sunk the ship in 1989, in just 99 feet of water. The wreck is located on the south side of Oahu off Waikiki, less than 100 feet from the San Pedro wreck. 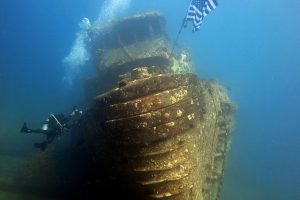 The USS Nashua is a U.S. Navy Natick Class Large District Harbor Tug (YTB 774). In 1965, the Nashua stationed at the Subic Bay Naval Station, Philippines. The vessel would use its 2,000 HP diesel engine to tow and berth Navy vessels, from submarines to battleships. The Navy tug did waterfront fire prevention, inner harbor patrol, and rendered assistance in emergency and disaster situations. The Nashua probably worked alongside the YO-257.

After the closure of the Naval Base in Subic Bay in 1992, the Nashua transferred to Pearl Harbor. It retired from service in 1994. Later, the Pearl Harbor Mobile Diving and Salvage Unit One acquired the Nashua. They sunk it here for submersion and underwater salvage training. The Nashua sits intact, listing to its port side. 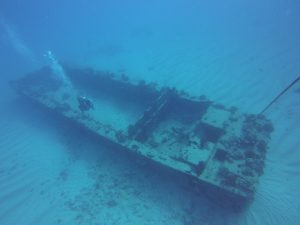 The LCM (Landing Craft Mechanized) 6 is a World War II-era landing craft that began service in 1943. Known as a Mike Boat, it was a larger version of the Higgins Boat. It was used for amphibious operations including landing and/or retrieving up to 20 troops, small vehicles, or a single tank.

The landing craft could beach itself on an enemy shore, lower the bow ramp, load cargo, and then return to the sea. The Mike Boats first saw combat during the invasion of Tarawa. In 1959, the LCM 6 made way for the larger LCM 8.

Not much is known about the LCM off of the South Shore of Oahu. Judging by the large coral growth, missing engine, and a good portion of it being buried in the sand, more than likely the LCM was intentionally scuttled a long time ago. 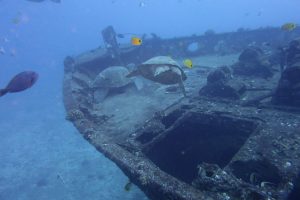 The San Pedro #50 was a South Korean commercial fishing and supply ship for the fishing fleet. On September 15, 1975, in heavy seas off Oahu, the Pedro caught fire when a large tank of diesel splashed on the hot engine turbine. The engine room turned into an inferno. The crew fought the fire for hours, but lost use of the water pumps, main generator, and communication system. They even used all eight of their fire extinguishers.

The crew happened to have 420 gallons of soy sauce, so they used that to fight the fire. Then, they used the empty barrels to form a bucket brigade. This continued for three days and three nights until the fire was finally beaten back. The disabled Pedro was adrift. Salvation came on October 29, when two tuna boats found the Saint Pedro off of South Point, Big Island. The crew survived on rice, kimchee, and water from the refrigeration system used in the fish holds (imagine the taste!).

Locals referred to the San Pedro, now only a damaged, burnt hulk, as the “Teriyaki Boat” because of the burnt soy sauce smell. The San Pedro sat at Keehi Lagoon, abandoned for 20 years. Throughout that time, homeless people squatted on the ship. State officials labeled the San Pedro a toxic dump due to the presence of stray animals (alive and dead), human waste stored in 55-gallon drums, and hundreds of containers leaking hazardous material on deck and into the ocean. Atlantis Submarines bought the ship for $1 and spent $360,000 to clean it up. Then, they turned the wasteland into a water haven by sinking the San Pedro next to the YO-257 as an artificial reef. 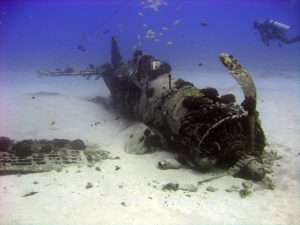 On April 17, 1945, Marine pilot Second Lieutenant William H. Holden of Marine Fighter Squadron 215 (VMF-215, The Fighting Corsairs) was on a training mission from Homestead Field Molokai to Ewa Field, Oahu. He noticed his engine RPM fluctuating, and then oil started spraying on the windshield. He suddenly experienced a loss of engine power. Lt. Holden safely made an emergency water landing and ditched his aircraft off of Hawaii Kai. His only injury, a cut above his right eye, occurred while climbing out of the plane. The Corsair is one of the few ‘actual’ wrecks in recreational depths on Oahu.

Although little more than the wings are still distinguishable as an airplane, it is still a great spot to dive when the conditions are favorable. Eels, octopuses, and a wide assortment of reef fish call the wings and rubble home. Garden eels are found in the sandy areas just off the wreck. This is also a great dive site to watch for larger pelagic species like spotted eagle rays and schools of amberjacks. Even whales buzz through this location during the winter season! 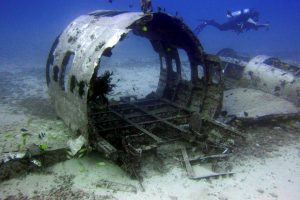 The Nihon Aircraft Manufacturing Corporation YS-11A is a Japanese-built twin-engine turboprop airliner. The plane was in production from 1962-1974. Locally, Mid Pacific Air used the 64-passenger plane from 1981-1988 for low-cost inter-island flights.

Atlantis Submarines sunk two of the 86-foot aircraft in 60 feet of water. One broke apart during the sinking, but the second landed intact on the seafloor. In 1992, Hurricane Iniki severely damaged the two YS-11s, dragging them into deeper water. This left only the wings, with a small section of the fuselage around them. In 2013, HURL found a small part of the tail in about 700 feet of water!

Please contact Hawaiian Diving Adventures for more information about our wreck dives. When you are ready to go diving, please use our online booking form to signup!

SEE OUR REVIEWS ON TRIP ADVISOR